​This soup may refer to many different asian culinary traditions. However, probably the most famous is from the regional cuisines of Beijing and Sichuan, China. This soup is meat based with chicken stock,  and often contains the ingredients of lily buds, tofu, bamboo, wood ear fungus, and sometimes pork blood .  The soup is made dark with soy sauce, sour with vinegar, and thickened with corn starch.  A distinct characteristic of this soup is the egg drop to make a swirl of white cloud like flecks of white that litter the finished soup.  This soup is thought to enhance the circulation of the body from the qualities of the tree fungus and lily buds, and has antiseptic properties of vinegar.  Primarily a soup, noodles of your choice may be added to create a delicious soup noodle dish. 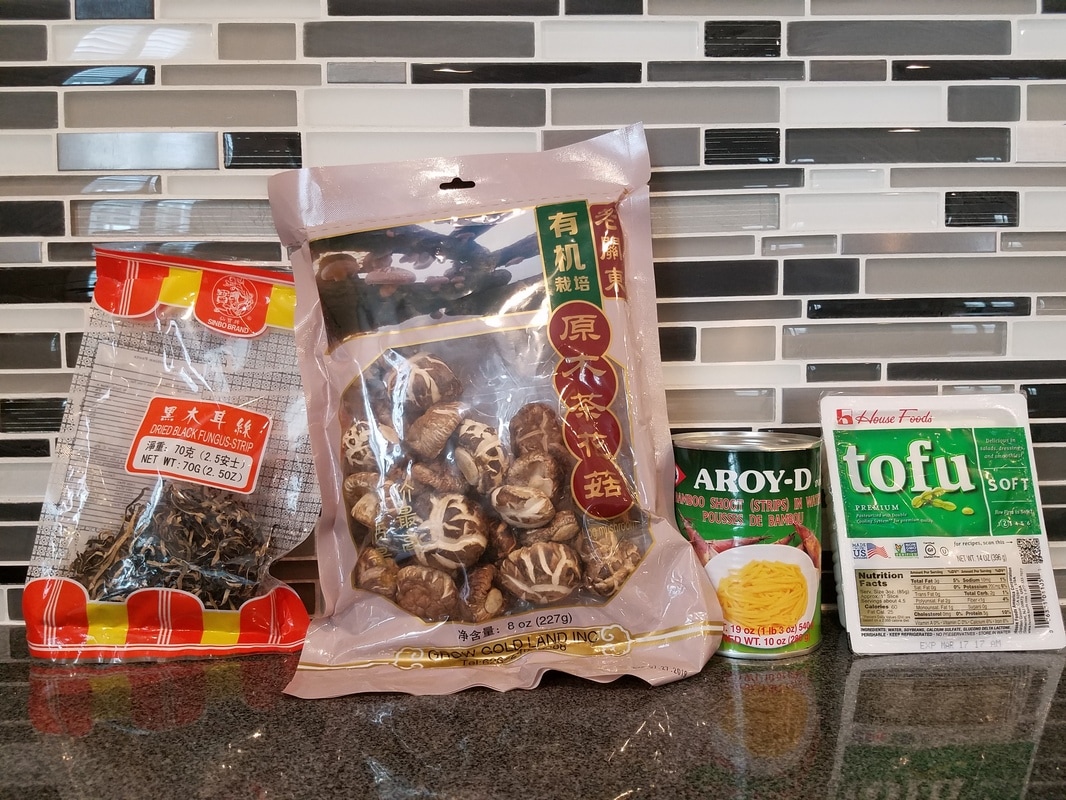 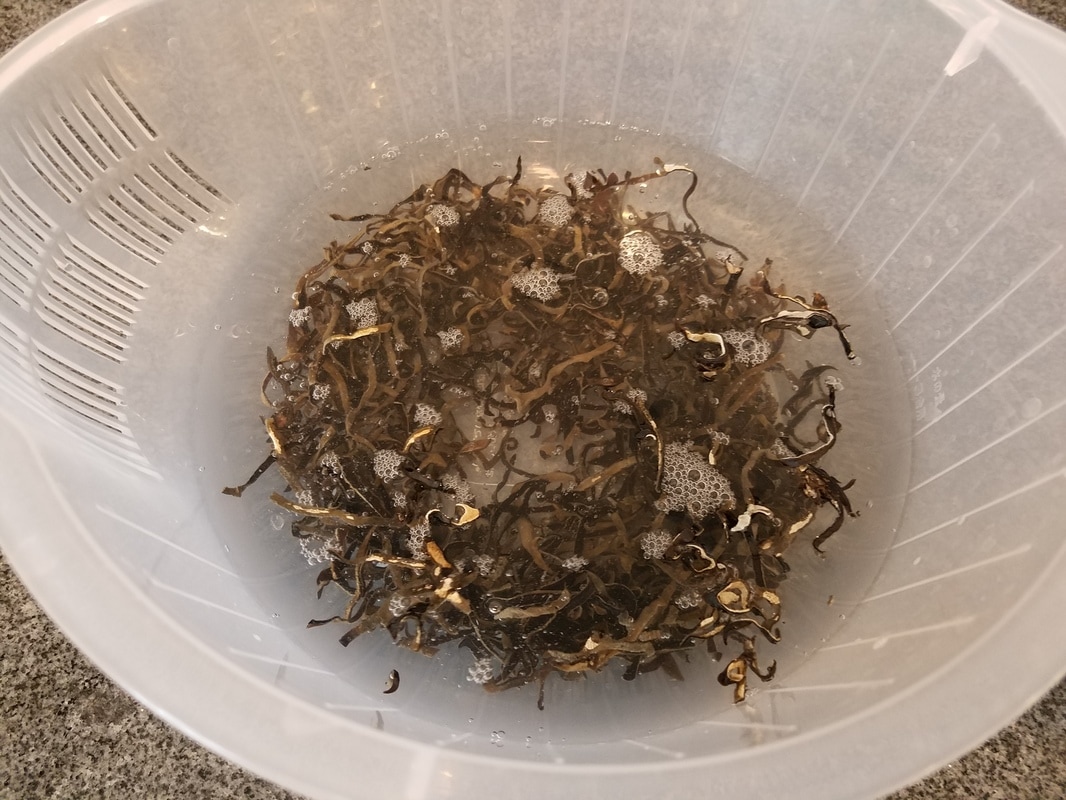 Wash the dried black fungus with cold water a few times, taking out the dirty water every time.  Then leave the fungus soaking in water for at least 5 minutes.
Same thing with the dried shitake mushrooms.  Wash it a few times, rubbing it all around with cold water to remove dirt particles.  Then leave it soaking in water.  These mushrooms will float so I typically use a paper towel to cover the top to help it sink a bit into the water.  These will have to soak longer, more than 10 minutes for it to get soft. 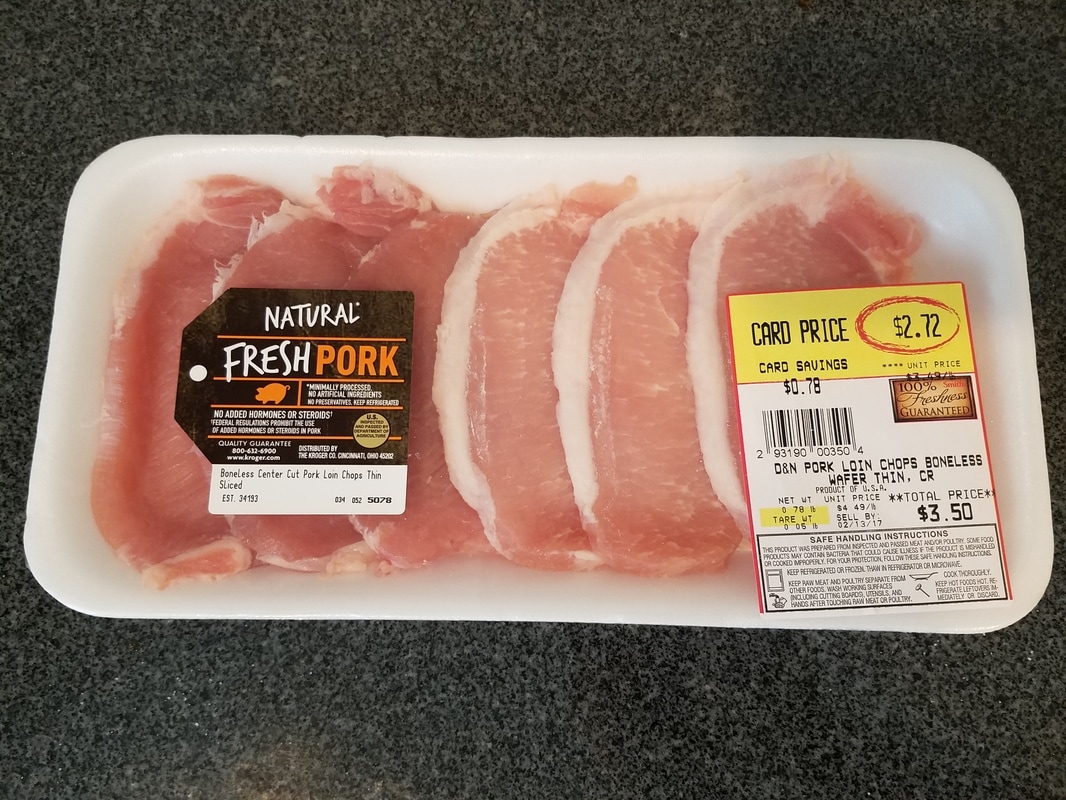 The pork loin can be found anywhere, and usually bought pretty cheap.  Nothing fancy about the meat.  If you are making this as standalone soup and without noodles, then use just about 3 or 4 loin chops, since your soup will be paired with another entree.  However, if you want to make hot and sour soup noodles, I use about 6 of them, or 0.75 lbs so they can be the main protein of the meal.
Chop them up in about 1.5" strips.  Season it with some ground black pepper.  Also in the picture is a 3" knob of ginger, slightly crushed to bring out some flavor. 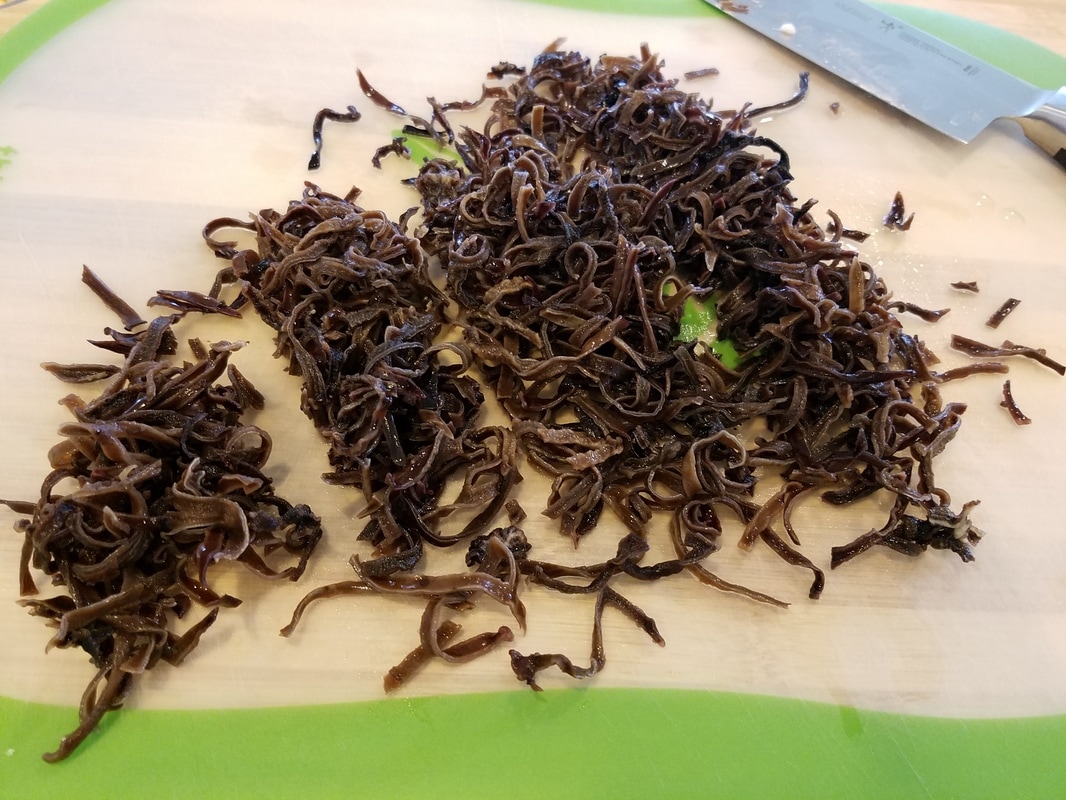 The black fungus should be ready.  Give it one more rinse with cold water and also chop these up a few times.  They should be around 2" strips. Of course there will be some longer ones, and some shorter ones but that's okay.
The bamboo in a can should be in strips already, although a bit long.  I like to rinse it with cold water first, and then dump out the water. Repeat this about 4 or 5 times to clean.  I also chop the bamboo a couple of times to make them about 2"strips. 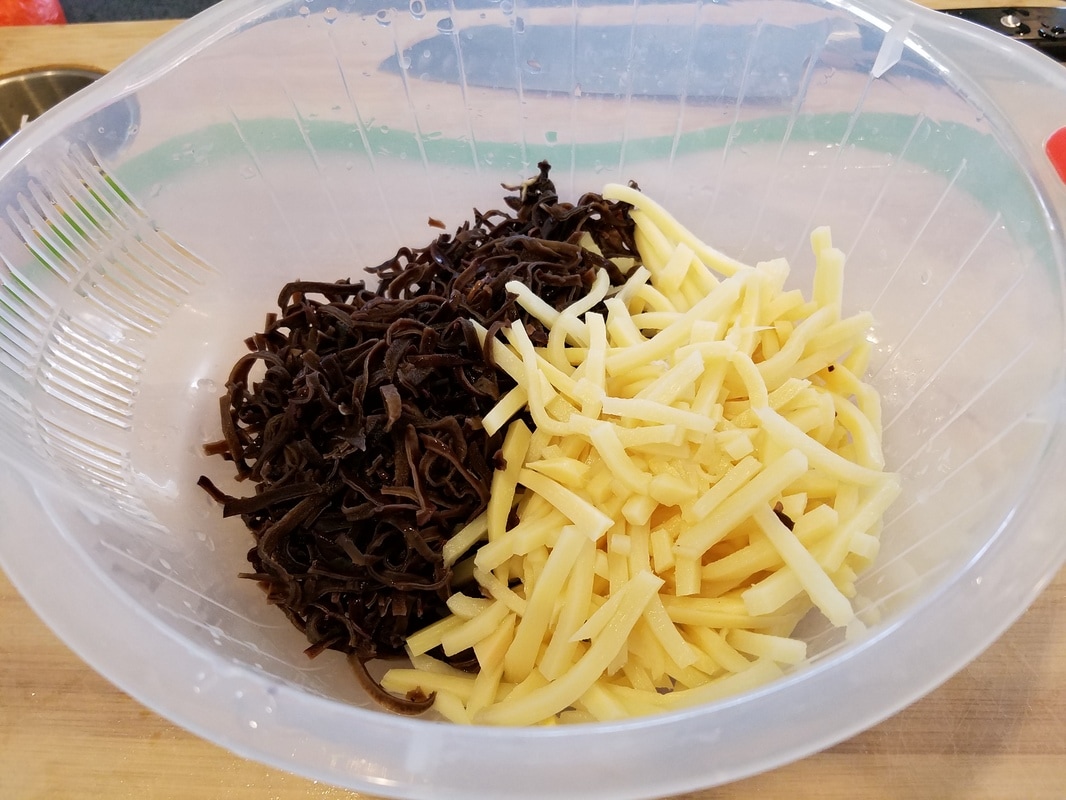 The bamboo and black fungus should be about 1:1 ratio in quantity.  There should be about a handful of each.
Time to get cookin'!  Drizzle some vegetable oil in a pot, around a tablespoon, and turn up the heat to medium.  Let it get hot before putting in the ginger and let it sizzle for a minute.  Then drop in all the pork loin pieces and stirfry it up while mixing to get it cooked evenly.  The pork will cook fast and brown in just a few minutes. 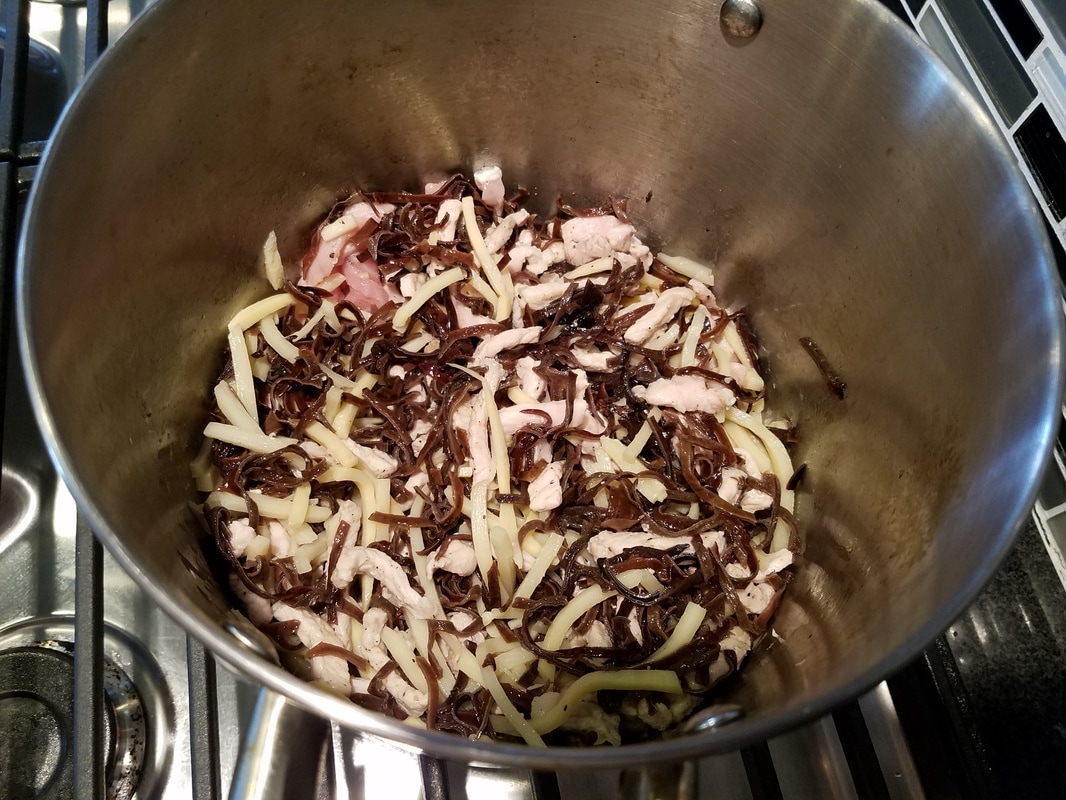 Before all the pork browns, drop in the bamboo and wood fungus in the pot.  Turn up the heat a little higher and mix it all up for about 5 minutes.  This will cook the pork fully, while also cooking the black fungus and bamboo. 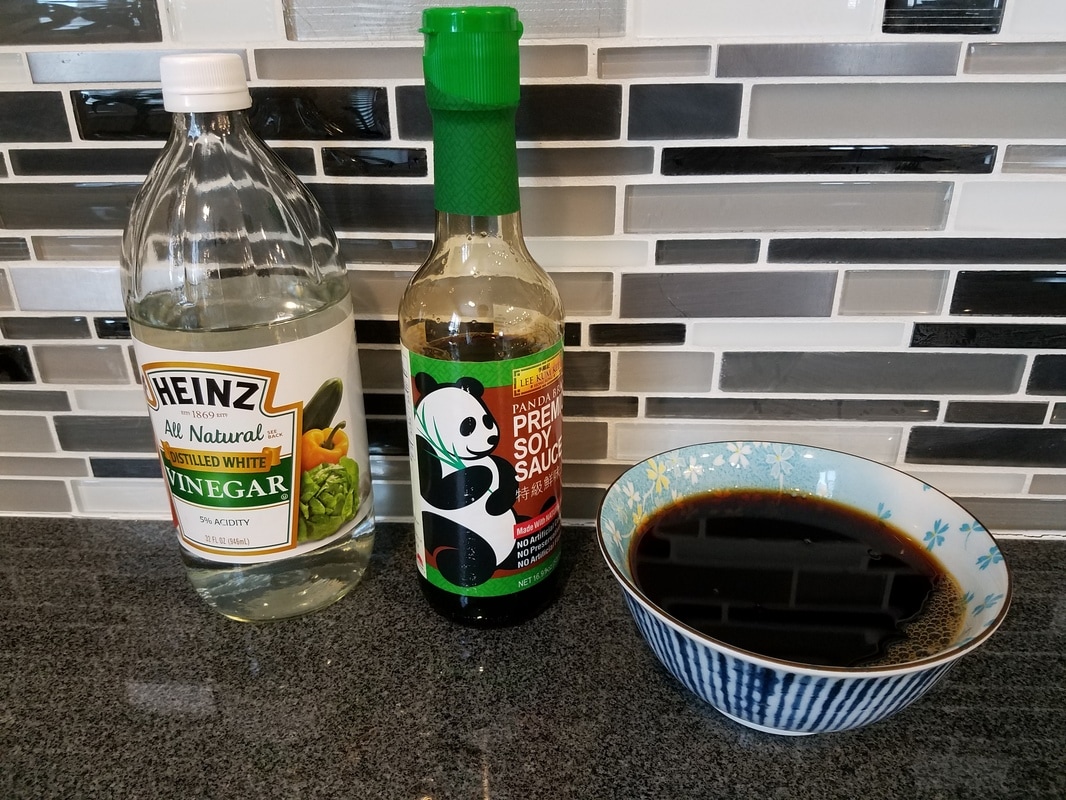 While the pork/bamboo/black fungus is cooking, you can assemble the main flavor to the soup.  Extremely easy to make.  Add 3/4 cup soy sauce and 3/4 cup white vinegar to a bowl.  This is the base flavor to hot and sour soup.  Of course you will be adjusting later.  If it needs to be more salty then add soy sauce, or if it needs to be more sour then add more white vinegar. 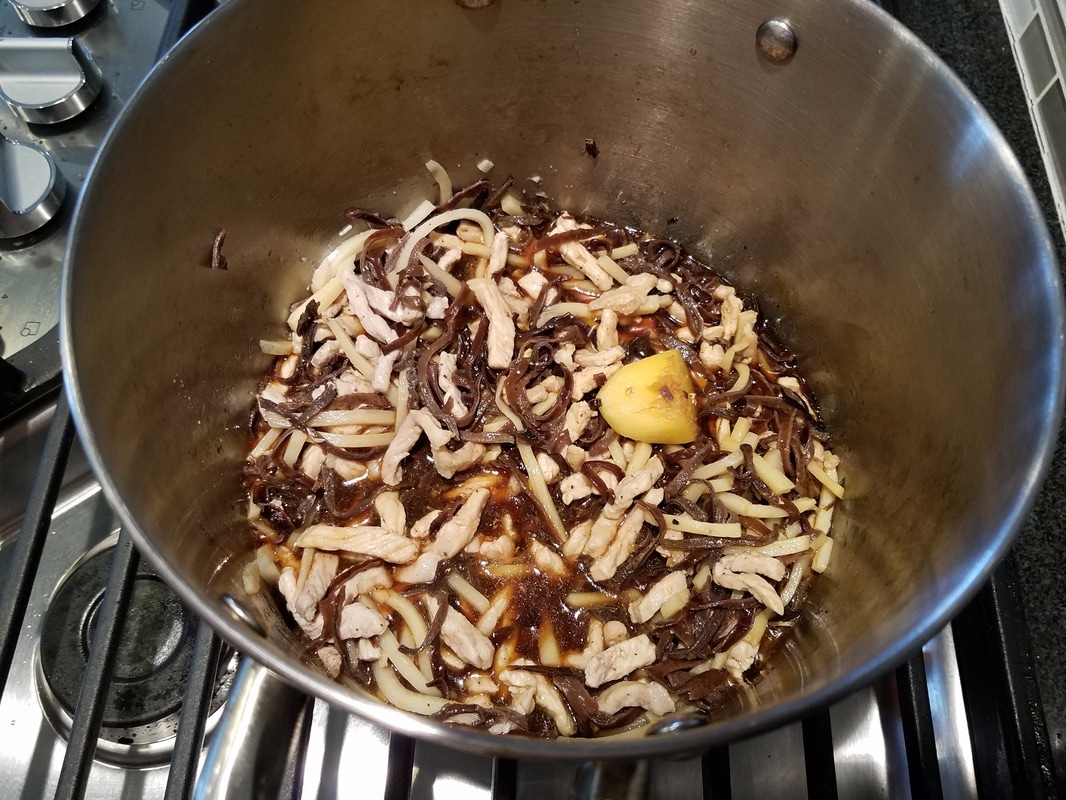 Dump the soy sauce/vinegar mixture into the pot and let it cook longer until it starts lightly boiling.  Let it boil for just a minute.
Pour two cans of chicken broth into the pot, along with 2 cans of water.  If you have your own real chicken stock, use that.  But if there's none available, canned Swanson always does the trick for me.  Continue with high heat until it starts to lightly boil again.
The shitake mushrooms soaking in the water should be soft now.  Drain the water, rinse again, and start cutting each mushroom into about 4 equal parts after cutting the stem off first.  Larger parts will be better for a soup noodle dish.  However, if you want to make this strictly as a soup without noodles, then you may slice them a bit smaller.  Discard the stems.  Place the shitake mushrooms into the soup and let boil for a few minutes. 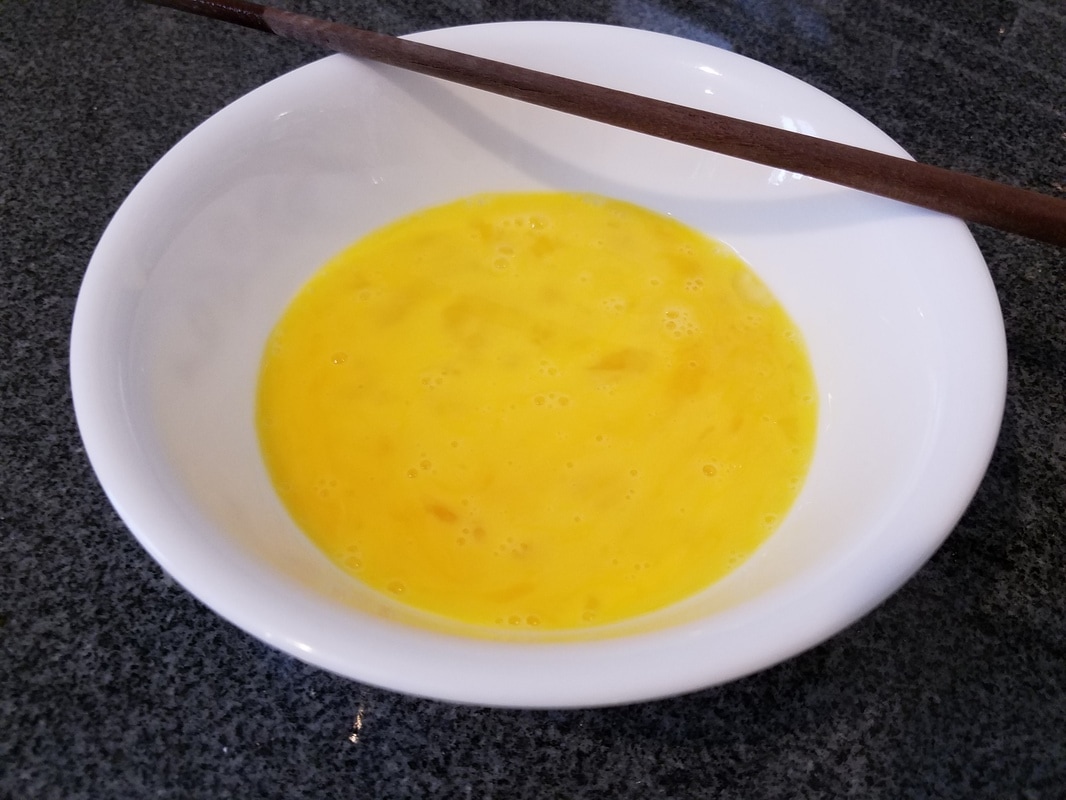 Meanwhile, beat 2 eggs in a bowl. 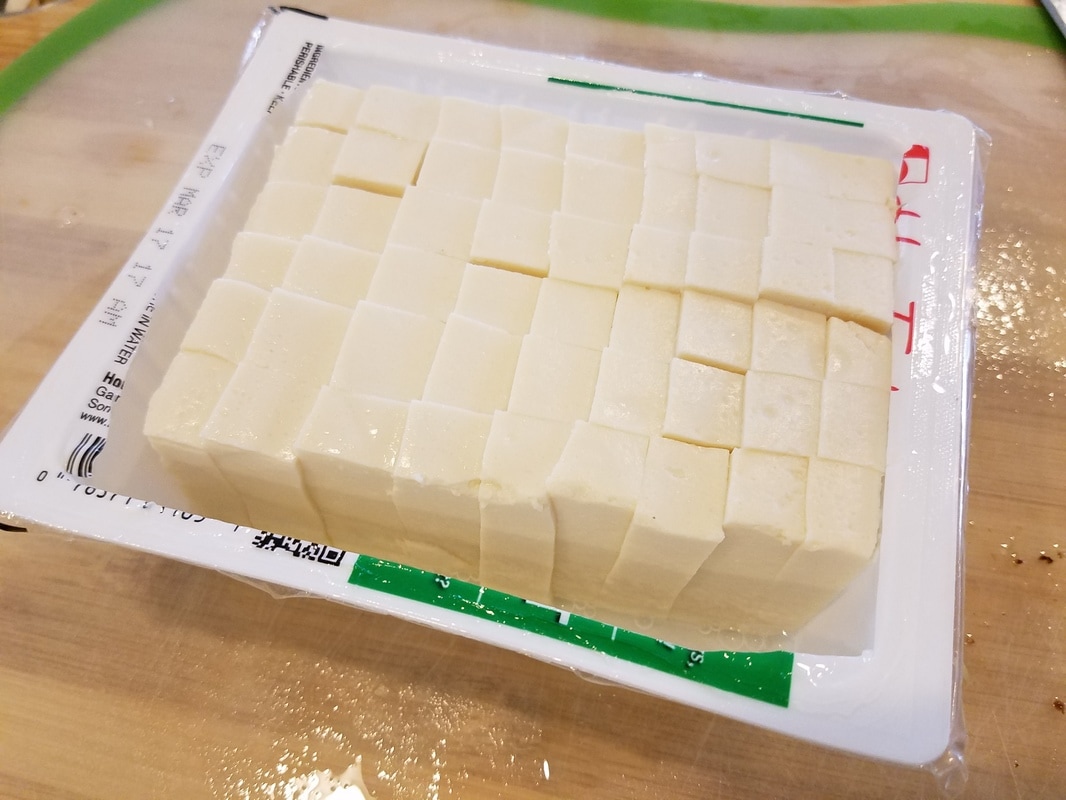 And also open up the tofu package, rinse with water first and drain.  Then cut them into strips with a knife.
The soup should be lightly boiling still with the mushrooms.  Dump all the tofu into the soup at this time and again let it boil lightly for a 5 minutes.
While it's boiling, take out some of the soup (make sure only to get soup) into a separate bowl.  Add the cornstarch little by little while mixing to avoid clumping.  Make sure the cornstarch/soup mix is free from clumps before re-adding it to the main soup.  The amount of corn starch will vary.  2 tbs will give it a slightly thick consistency but good for noodle soups.  If you want it thicker for standalone soup, add a bit more around 4 tbs. 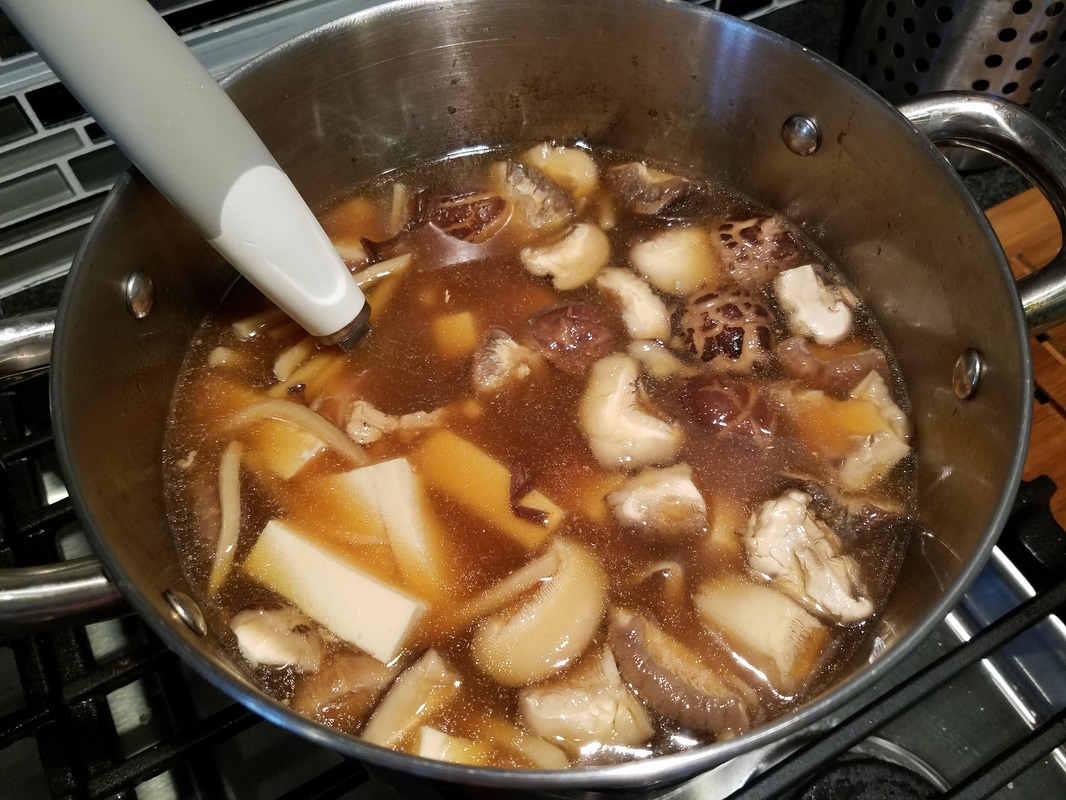 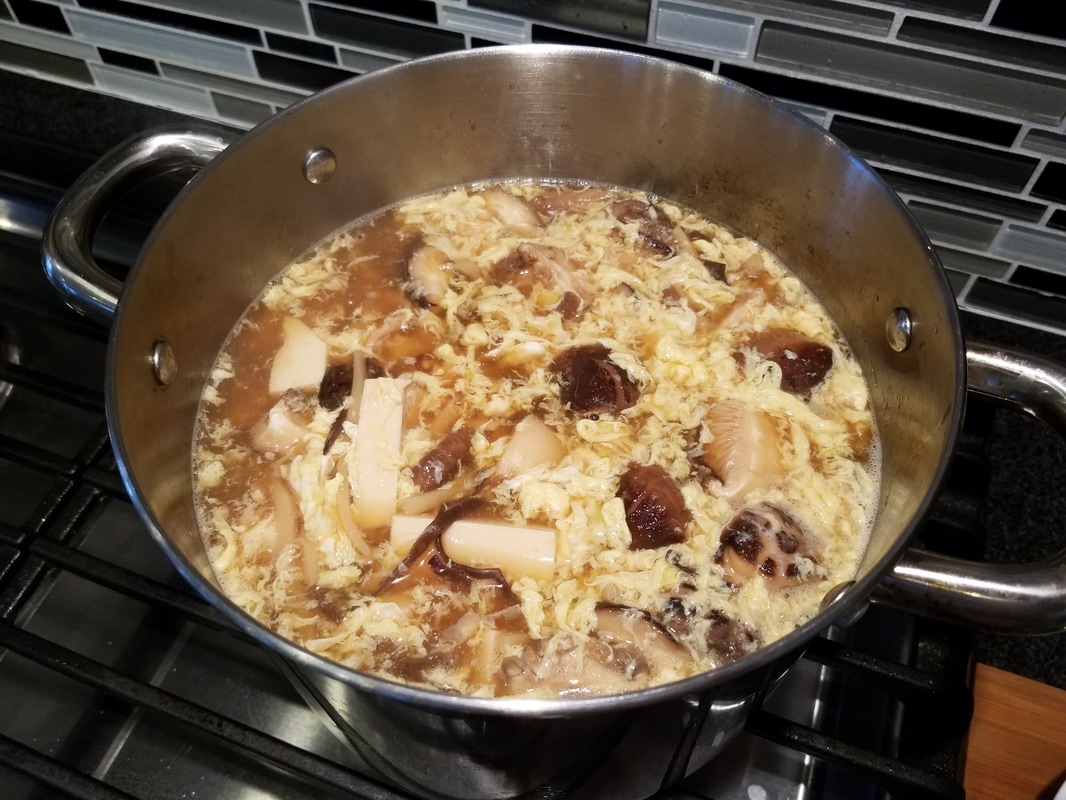 To serve, top the noodles with some chopped green onions and fresh cilantro.  Serve with sesame oil and black/white pepper on the side.