​Pronounced "Fuh," it is considered the national noodle dish in Vietnam.  Originated in the 20th century in northern Vietnam, it was sold at dawn and dusk by street vendors.  Chicken Pho appeared in 1939, and rare beef around 1945.  Vietnamese refugees after the Vietnam war brought pho to many different countries, and eventually entered the U.S. in the 1990s and is now an extremely popular dish found in most Vietnamese restaurants around the world.  This soup noodle consists of rice noodles in a hot broth made from herbs and chicken or beef bones and meat.  The soup should come with a variety of garnishes such as basil and mint leaves, bean sprouts, cilantro, lime, and green peppers.  The simple. yet very comforting, warm, hearty soup is perfect for cold rainy days, and has been adopted in the U.S. as a popular "hangover" cure.

Here's a picture of all the ingredients to the broth.  I usually get the packaged spices (shown top left), which makes it very easy.  It even comes in a bag to put all the spices in.  However, feel free to get your own if you want to make sure you use fresh ingredients or have some spare.  The rock sugar pictured here was actually a bit too much unless you like to have your broth a little on the sweeter side.  Cilantro stems, are just that, cilantro stems.  Cut the stems of a bundle of cilantro and tie it up with twine.  Rinse it off a little bit to clean. 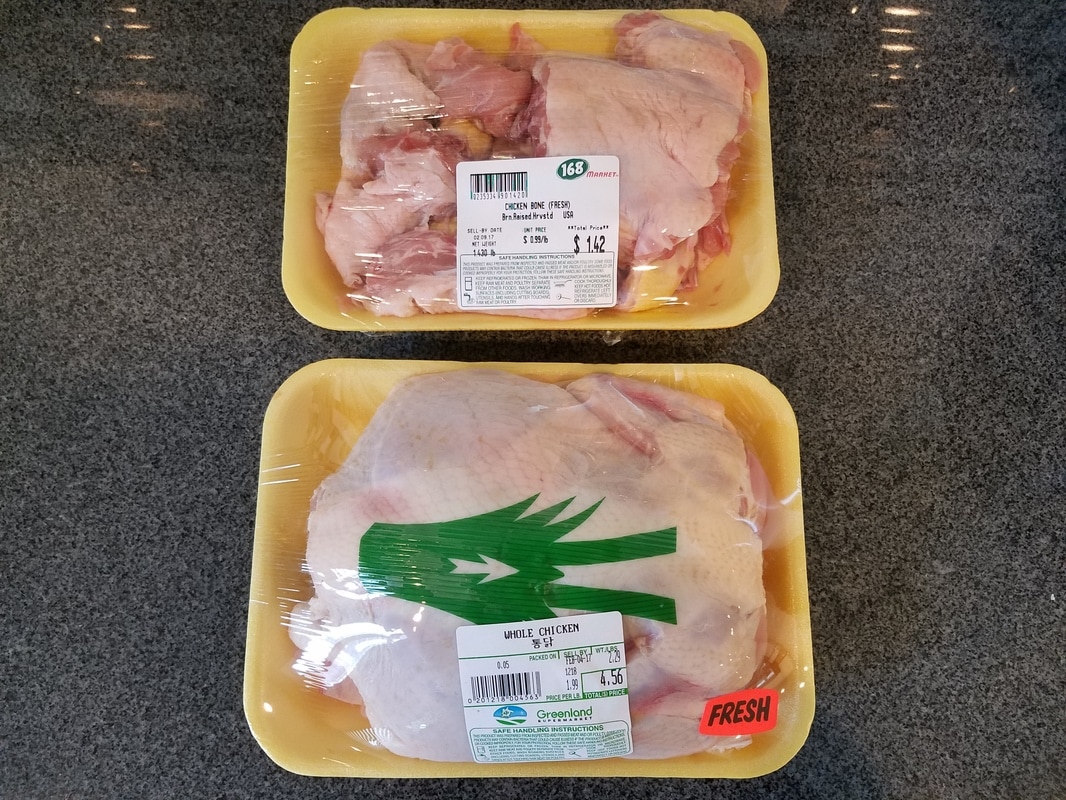 The heart of the soup.  A whole chicken and extra chicken bones.  The whole chicken adds flavor but more importantly has the meat you will be eating.  The bones are for the extra flavor.  When bones are cut open and exposed, it adds more of the flavor to the broth.  You can usually buy these ingredients at any market, however the chicken bones may only be at Asian markets.  If you have the chance, use the chicken found in Asian supermarkets as they tend to create a more flavorful broth in my opinion.
First thing is to char the onions and ginger.  This will improve the flavor of the broth later.  Cut the two onions in half vertically and leave the skin on.  Also cut the ginger lengthwise with the skin on.  I like to put them face down on the stove so the flame really heats up and chars the inside first.  Make sure you turn on the vent because it can get a little smokey if parts of the onion catch fire.  It should char with high heat in just about 5 minutes.  Afterwards, flip it over and char the other side just for a bit.  Once charred, remove the onion and ginger with tongs (should feel slightly softer) and place it on a plate to cool.  Once cooled, you may want to rinse it under cold water to clean off some of the debris and charred part because it may blacken the broth a bit.
In a large pot, place the bones and chicken into water and turn up the heat.  I usually like to boil it just for a minute just to clean it (left picture), then dump everything out in the sink.  Wash the pot, then re-add about 10-12 cups of water and place the chicken parts back in.  I also always add a tablespoon of white vinegar to the boiling broth just to help bring out the flavor of the chicken bones (right picture).  Boiling the chicken first to clean is not necessary, but I feel like it does clean it of any impurities for the broth.
Spices should also be heated up on a pan to roast for maximum flavor.  Medium heat is fine and just shake the pan around to roast all the spices for about 5 minutes.  Some smoke should appear and you'll definitely smell the aroma.  The pho spice package should come with a cheesecloth bag for the spices.  If not, you can always get your own wiremesh spice holder, and if all else fails, just dump it all in the broth and later strain it.
Right before the water gets to boiling, add all the ingredients (4 halved onions, 2 halved ginger, spice bag, cilantro stems).   Add the rock sugar and fish sauce, about 1/4 cup, but will vary as that will determine how salty you want your broth.  You can always add more later.  Always add little by little.  Let the broth boil and turn down heat and cover.  Let it boil lightly for about 1 hour.
After an hour, take the chicken out of the broth and set it aside to let cool.  You will be tearing up this chicken real good.  Once cooled, wash your hands and use your fingers to rip apart all the meat, preferably into about 2 inches strips. Try not to waste any of the chicken!  You'll have bones remaining and place that back into the broth.  I typically dry the chicken meat with a paper towel and place them into a tupperware to be used for later.
Turn up the heat again to a light boil and cover.  Let it lightly boil for 3-4 hours and you'll see the soup has become a dark golden color and reduced.  At this point, taste test and add more fish sauce as needed.  Soup should taste a little sweet and salty, but with the aroma of the spices.
If the soup tastes bland for any reason (maybe added too much water) or you just want a more intense flavor, you can cheat and use Pho Ga spice cubes from Asian supermarkets for added flavor.  All you do is drop a cube in the soup while it is lightly boiling.  Be warned that this spice cube isn't the healthiest as it contains extra sodium and MSG. 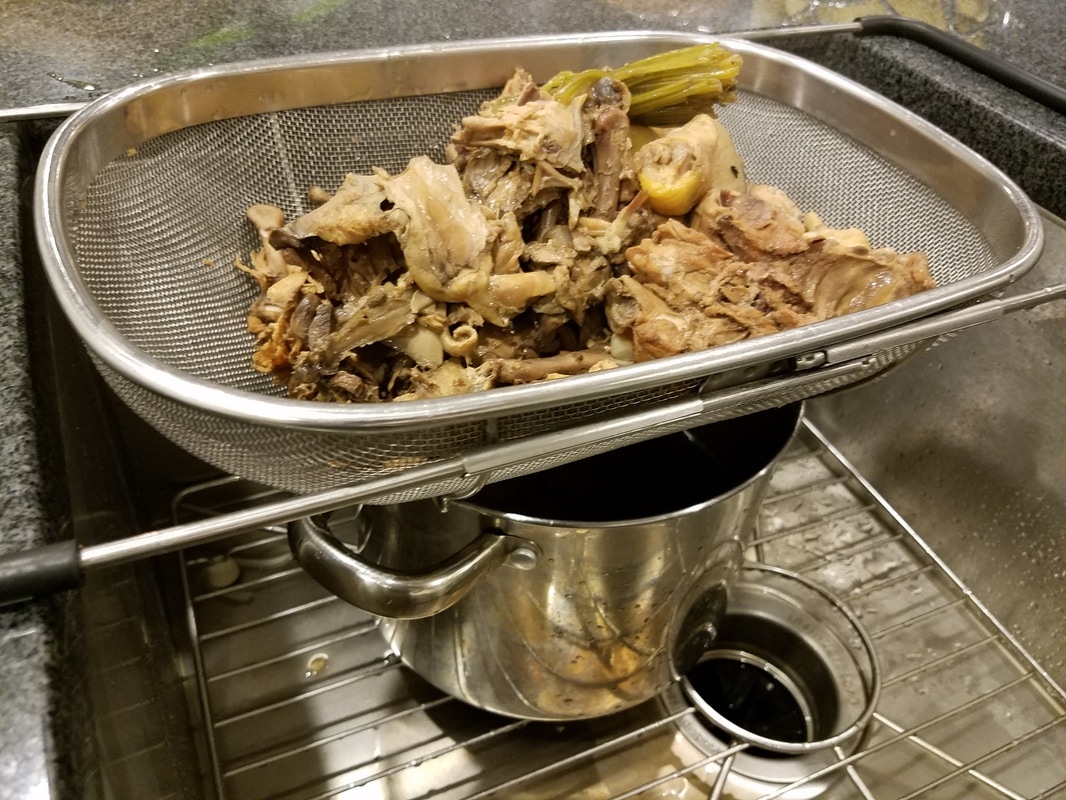 Once the broth is tasting how you like it, strain it over the sink to prevent any disasters.   Depending how fatty you want your soup to be, at this point you can refrigerate the broth over night and scoop out the top layer of fat in the morning, or just leave it as it is. 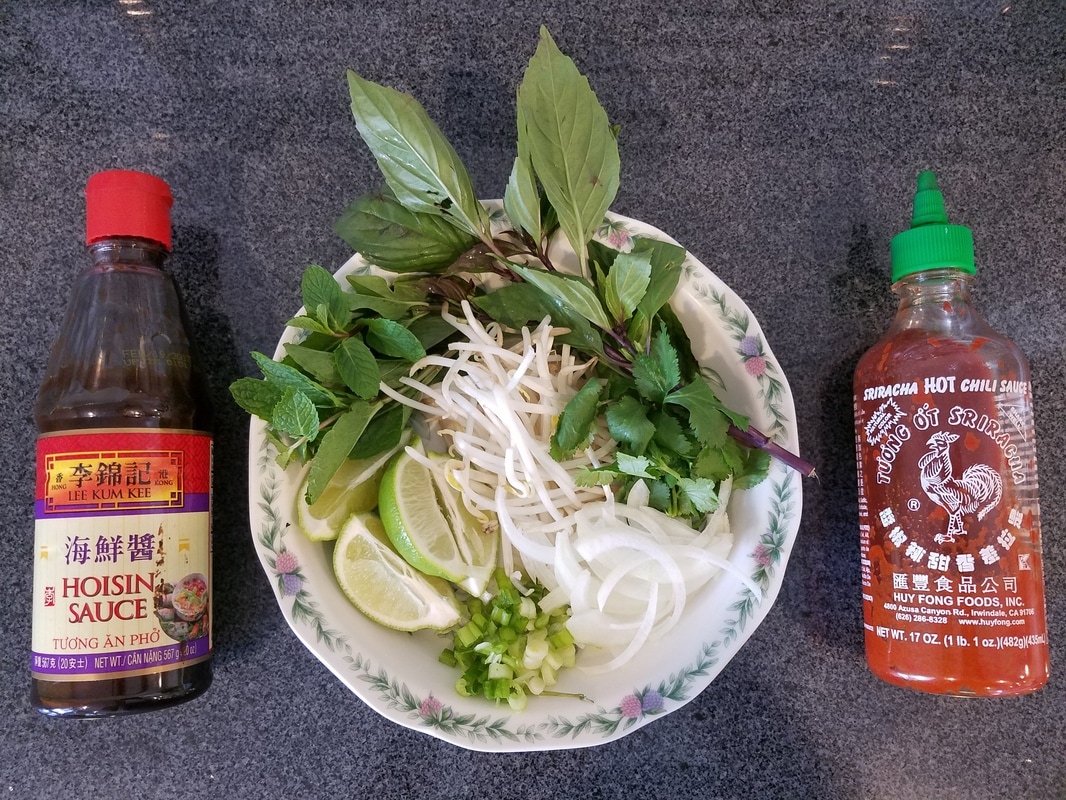 Garnishing and sauces.  For me, Sriracha is a must but I don't tend to use hoison sauce.  I like to use 1 to 2 squeezed lime wedges, cilantro, chopped green onions, sliced red onions, mint leaves, sliced jalapenos, Thai basil leaves, and bean sprouts.  But the choice is yours.  To be safe, just wash and prepare it all for your guests to choose from.  That is how most Vietnamese restaurants serve pho, with a side plate of all the garnishes. 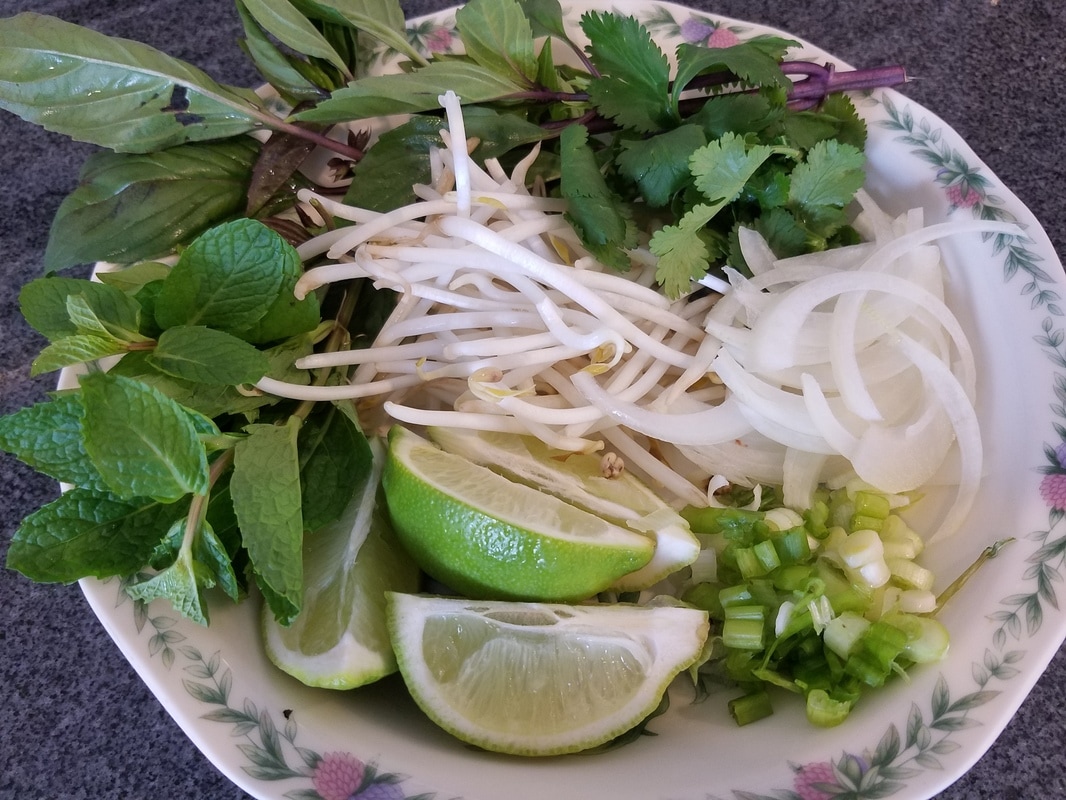 A close up picture of the garnishes minus the jalapenos

Time to serve.  Essential for pho, you MUST get rice noodles which you can find at most Asian markets.  These are always put out fresh, not refrigerated.  Put the rice noodles in boiling water for 10 seconds!  That's all that is needed to cook these noodles. Cook it too long it will get mushy.  Also, the broth will help cook the noodles as well. Swish it around a bit with chopsticks so it doesn't clump and it cooks evenly, then strain the water.  Place the noodles in a bowl and pour piping hot broth on top.
The final product should look something like this.  A bowl of soup and noodles, and a plate of garnishes.  Enjoy! 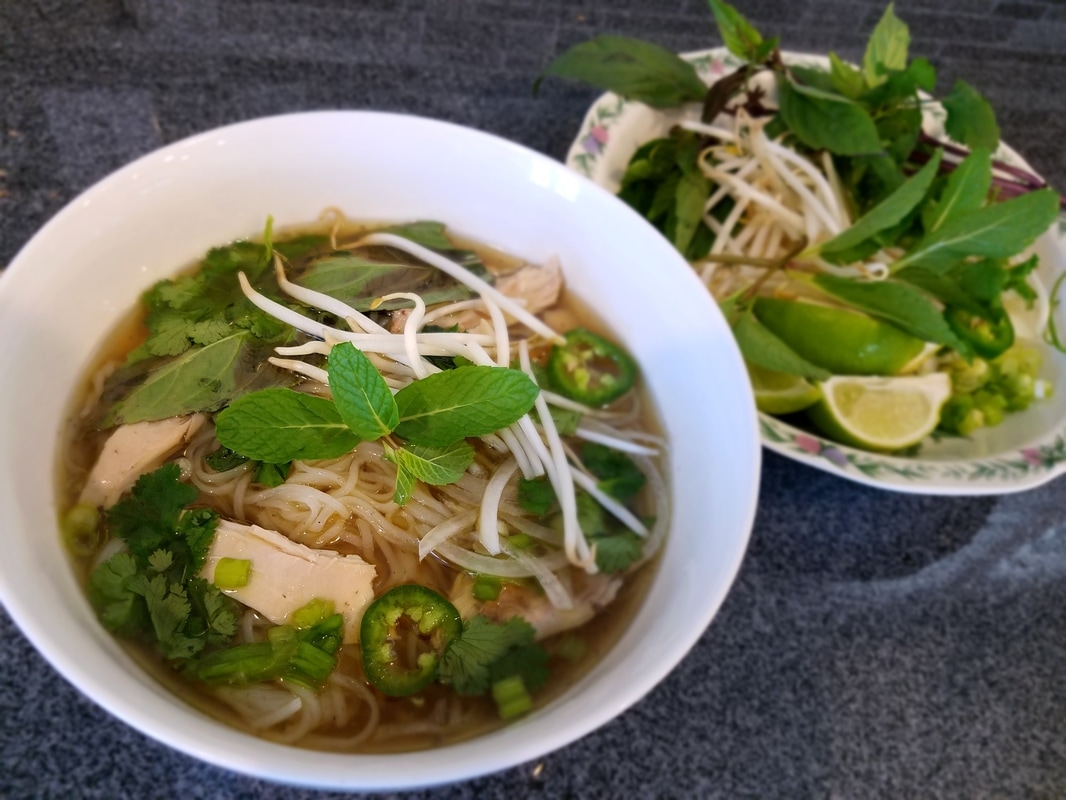