​A Japanese noodle dish that consists of wheat noodles served in a pork, chicken, fish or combination based broth, often flavored with soy sauce or miso.  Toppings usually include sliced pork (chashu), dried seaweed, green onions, egg, and bamboo. There are a multitude of different styles of ramen depending on the region of Japan, each with its own unique flavor.  Considered the ultimate comfort food, Ramen is consumed all around the world as a quick meal during lunch or after work, or enjoyed at a restaurant with family and friends.  To make authentic ramen, the broth must be simmered for many, many hours (up to 60!) to slowly dissolve and release fat, bone marrow, calcium, and other protein and minerals into the soup to create a very rich and fatty broth.   One of the favorites in Japan, it is a lifelong undertaking for a chef to create the perfect ramen bowl.  ​ 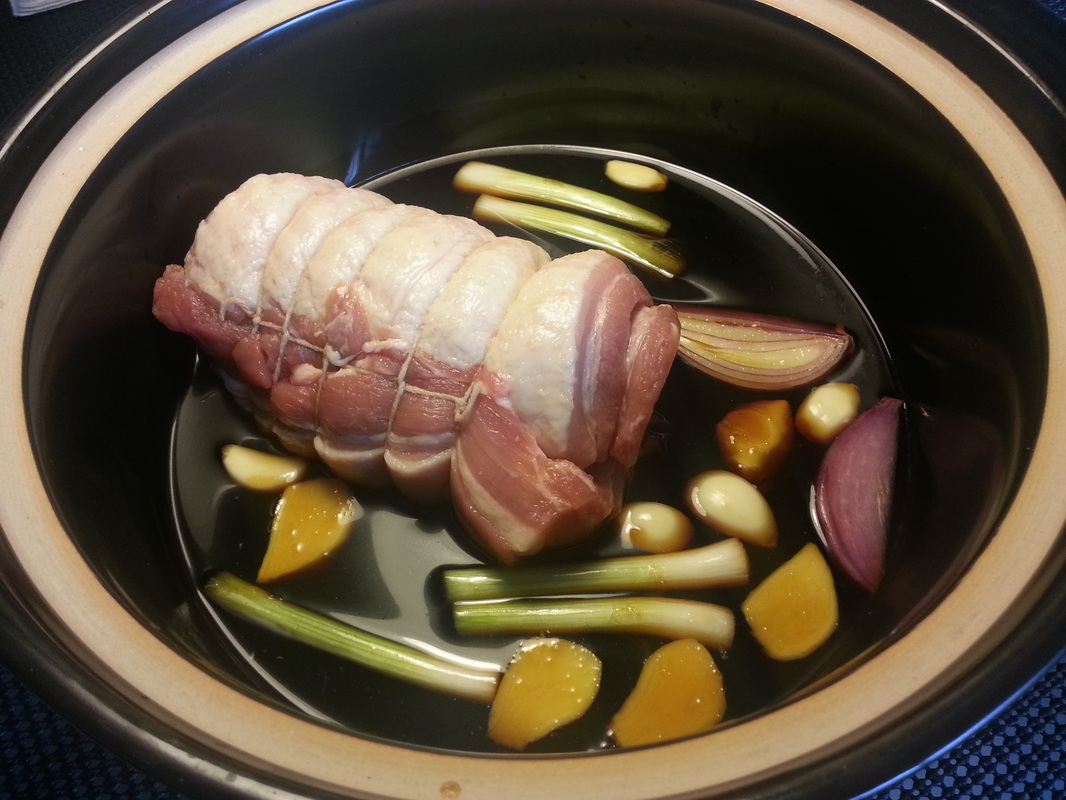 Roll up the pork belly with fat on outside and tie with twine nice and tight. Add all pork marinade ingredients into a dutch oven and marinade pork for at least 4 hours in the fridge, flipping pork once at 2 hours.
​ 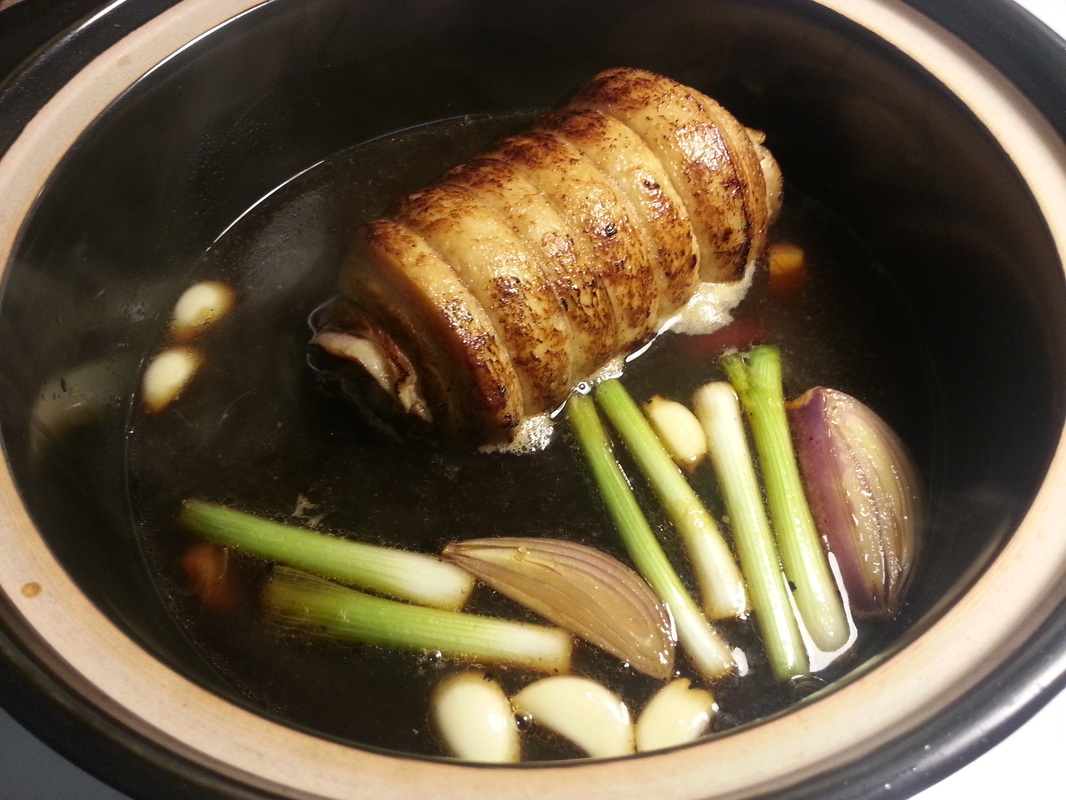 ​Preheat oven to 250F. Add oil to separate pan (preferably cast iron), set heat on high and sear all 4 sides of pork for 1-2 minutes. While searing, heat up the marinade in the dutch oven on a stove until it boils.  Once the marinade boils, turn off heat, and place pork back into the dutch oven and into the preheated oven for about 3 hours and cover with lid.  Turn pork every hour in oven.
​ 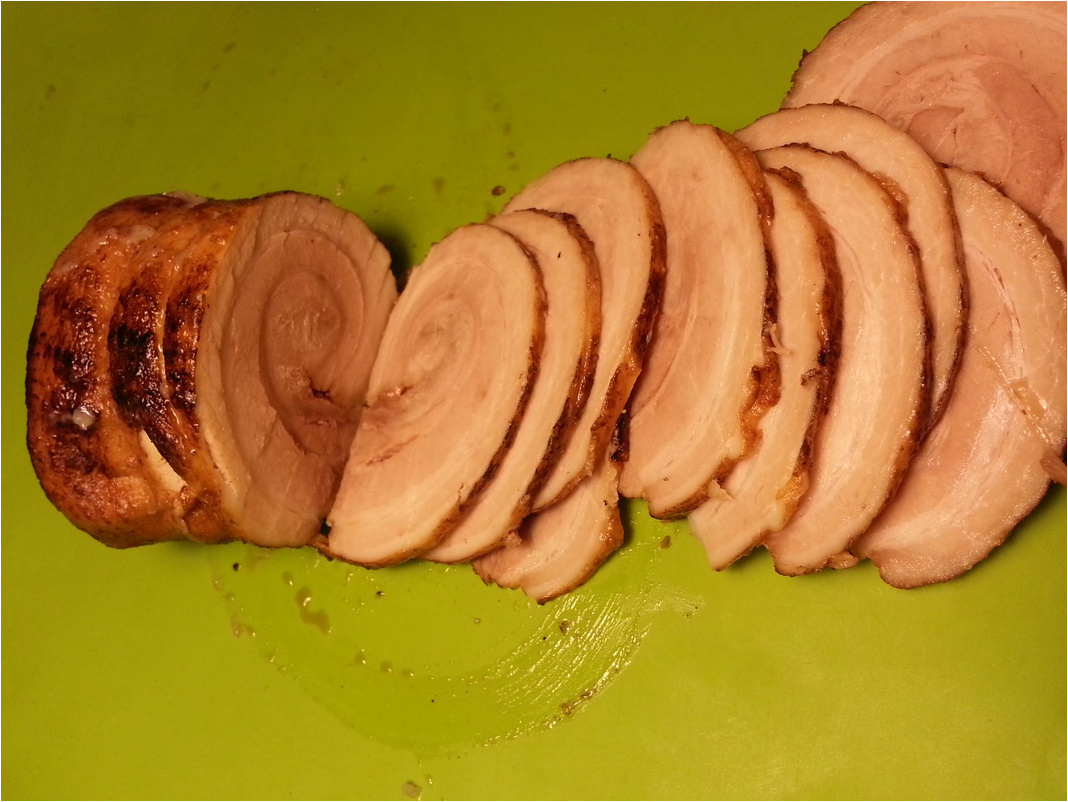 Once done, let the pork cool in refrigerator, and boil marinade until reduced to a sauce for additional flavoring for the broth. After pork has cooled for a few hours, slice very thin and save for later.
​ 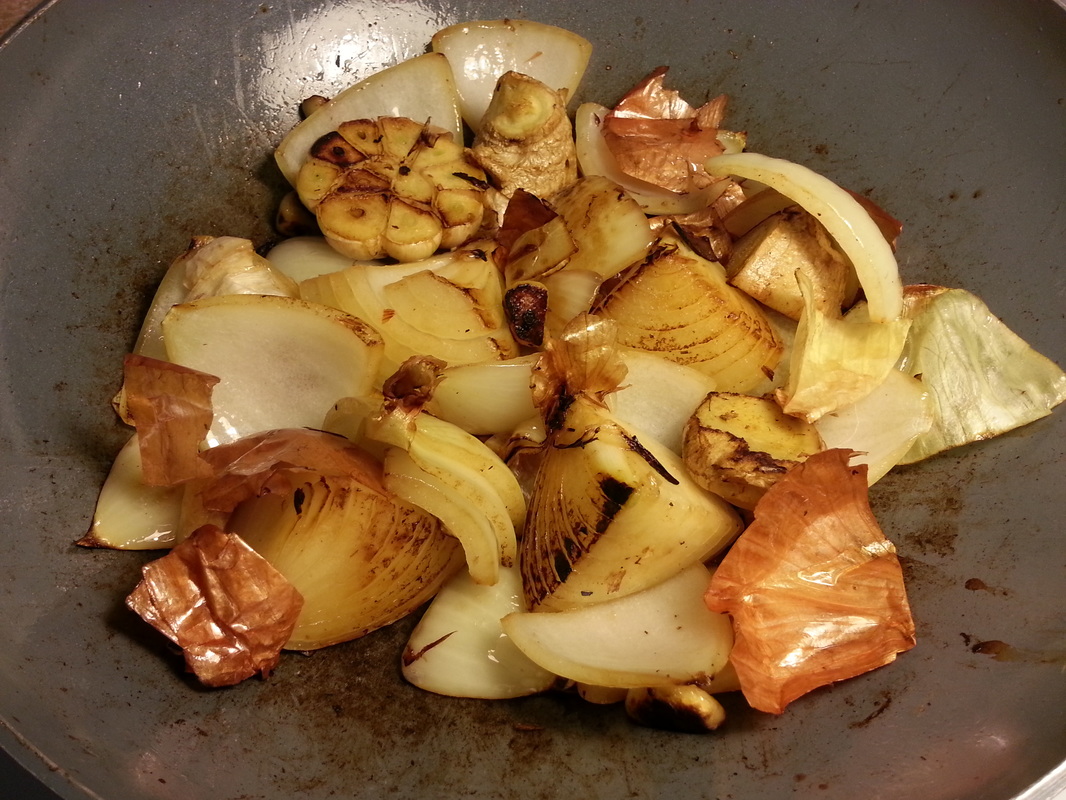 Cut the onions in 4 with skin on, garlic bulb in half, and ginger into slices.  You may stirfry or char the onion, garlic, and ginger on a stove until soft. To char, just place them on an open stove with fire, but be careful as the onion skin can catch on fire!  Remove the charred skin. ​ 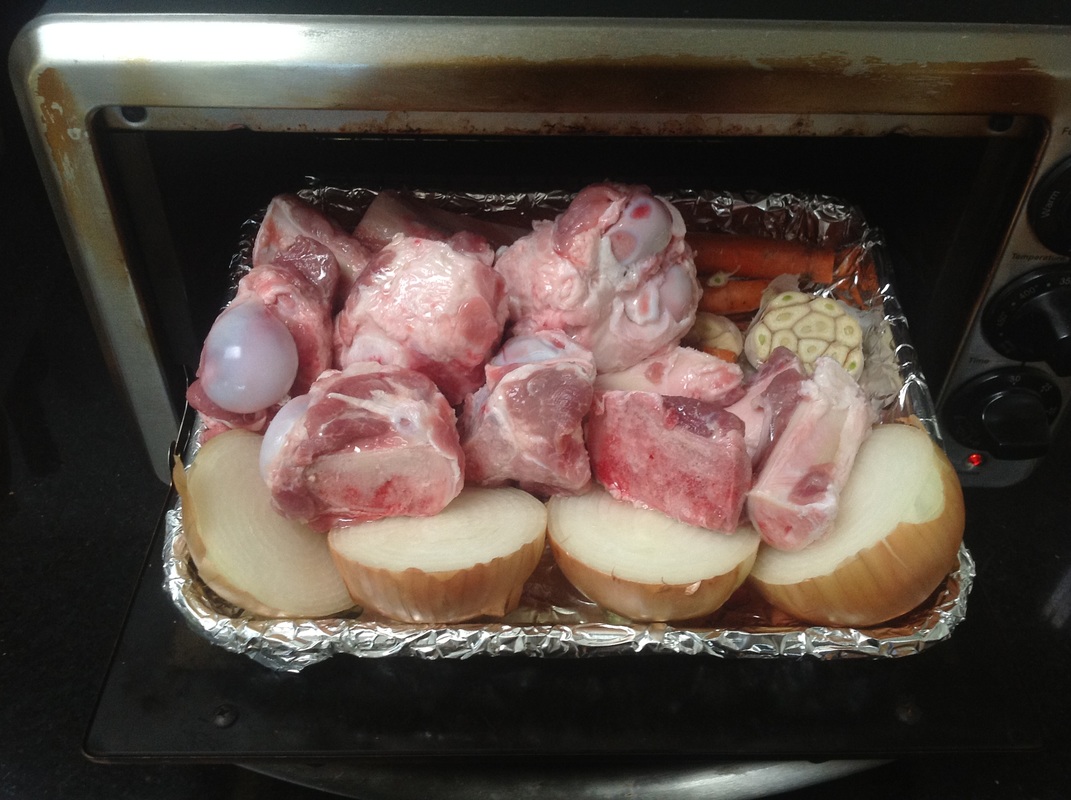 Optionally, you may bake everything (broth ingredients and bones) in the oven at 400F for 30 min to char them or until brown before placing them in the pot with water.
​

Place all bones in pot and boil for about 3 min. Remove bones and clean VERY thoroughly until there are little to no brown spots on the bones or pot. This part is essential to a golden broth. Place bones back into pot and boil for additional 10 min and remove skum from the top of the broth.
​ 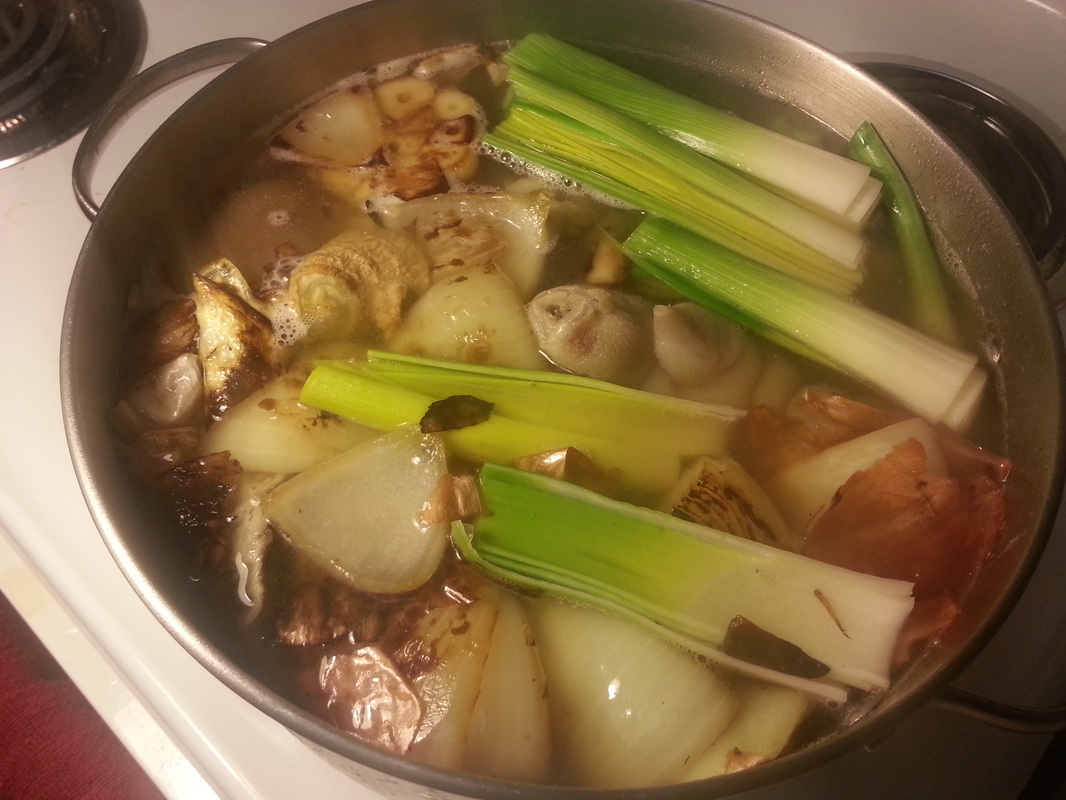 Add the other ingredients into stock, along with the leek and green onions.  Heat until a rolling boil for 12 hours with lid. Top with hot water when necessary. 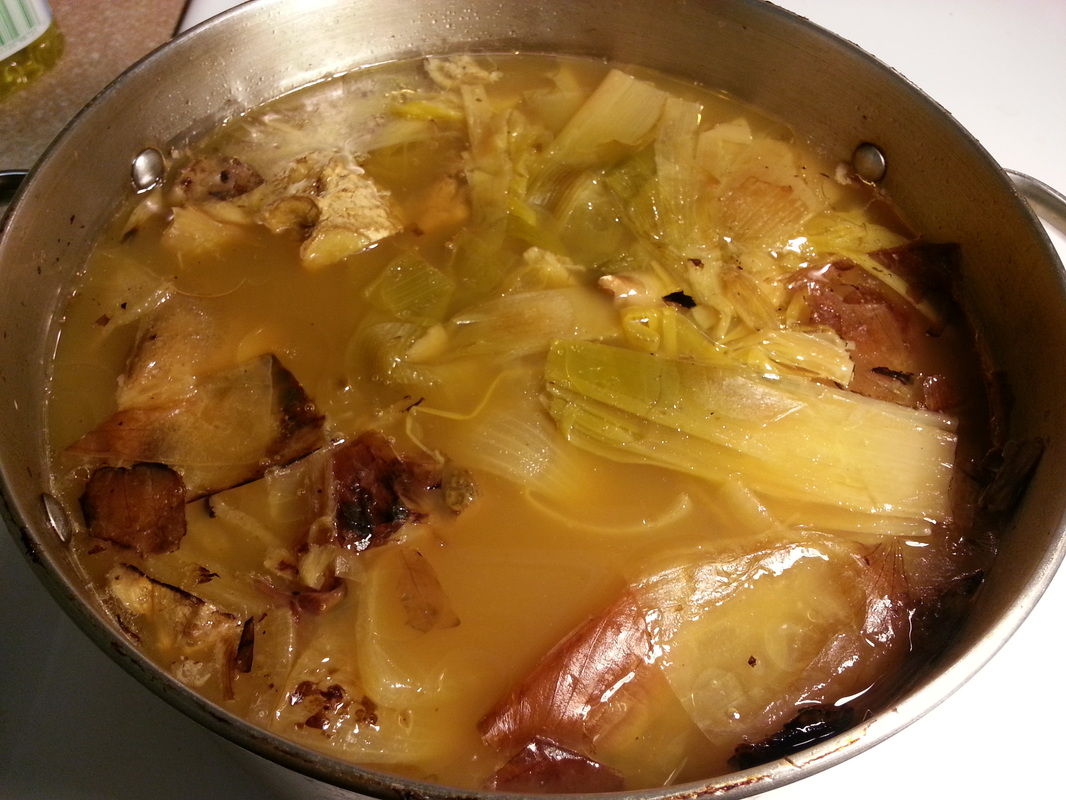 Cook on high heat until reduced to about 12 cups stock, then strain. You may refrigerate for a few hours to remove fat on top layer if you want. Add salt to taste. You may add miso to the stock for a miso flavored broth, or you can leave it alone.  To serve, just add piping hot broth onto cooked ramen and chashu, and add the garnishes!  The reduced marinade from the chashu can be added for additional flavoring. Enjoy! 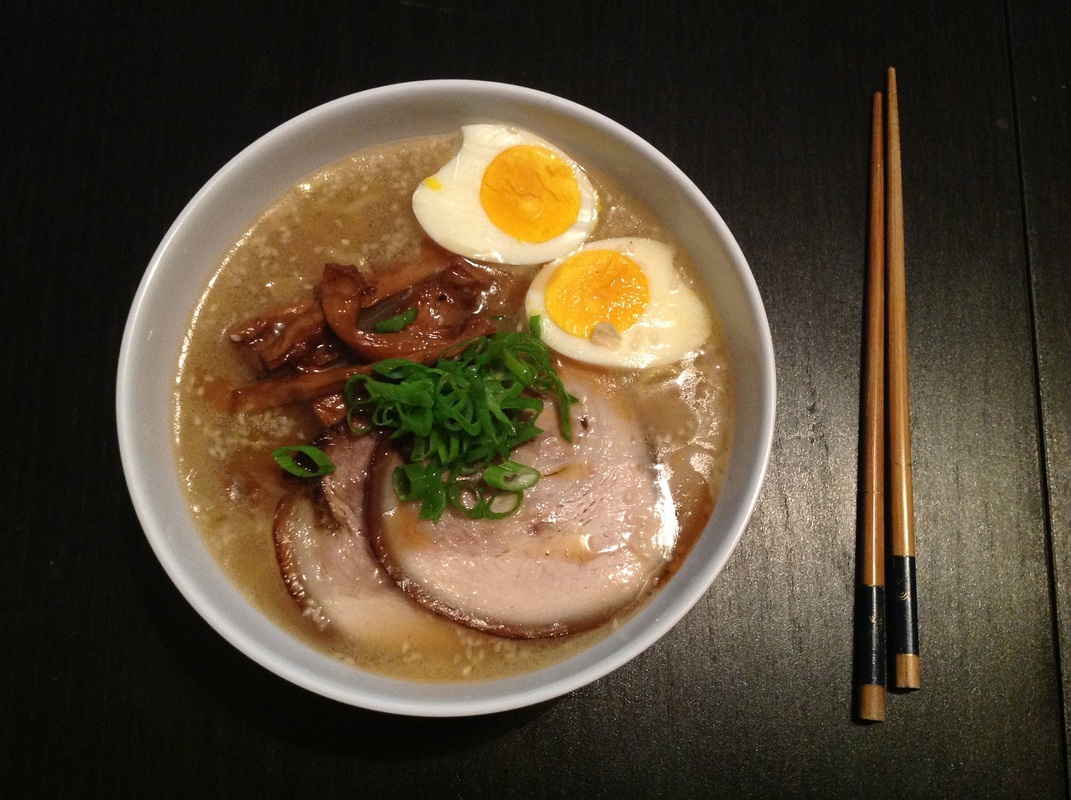